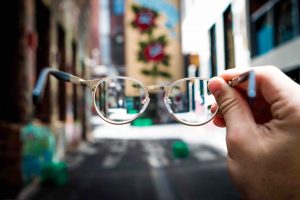 In most courtrooms, you will note the image of Lady Justice who carries scales and is blindfolded. This carries the connotation that justice or the criminal justice system should be (but is not) blind to prejudice and other characteristics of the baser intellect. No better (nor ironic) evidence of this fact can be shown in the case of a black teen who was given 76 years on the word of a legally blind witness.

How did this happen? Well, let us take a look.

This sad spectacle was enough to convict the man.

A Judge Heard This Trial

Defendants have the option of either a trial by jury or a bench trial. Bench trials are rarely more advantageous to the defendant, but in certain cases, a criminal defense attorney may believe it is the safer choice. But, in this case, it was not.

The prosecution had no physical evidence tying the defendant, Darien Harris, to the crime. The man was convicted entirely on the testimony of the prosecution’s lead witness, Dexter Saffold, who is legally blind. The judge, in this case, said that Saffold gave “unblemished” testimony and said that he believed Saffold was an “honest” witness. However, the U.S. government and Saffold’s doctors had deemed him legally blind years before he “witnessed” Harris shooting two people. A second witness recently issued a statement that police had “pressured” him to identify Harris as the shooter, but this witness was never called to testify.

Now, Harris is hoping for an appeal.

Witness Concealed the Fact That he was Blind

The fact that Harris was convicted of murder solely on the testimony of a legally blind witness and that there is a second witness willing to say that police pressured him to finger Harris are both good for the appeal. Also good is the fact that Saffold swore under oath that there was nothing wrong with his vision and that turned out to be a complete misrepresentation of the facts. Better still, Harris has no criminal record, came from a stable family, and has his GED.

The attorney representing Harris asked Saffold if he had diabetes. He replied that he did. The attorney then asked Saffold if he had any vision problems. He appeared to say that he did, but then realized that he had been tripped up and said that he did not have any problems seeing. Due to severe glaucoma, Saffold has been declared legally blind and has a 16-year history of filing civil complaints against doctors, landlords, and others who he claims discriminated against on the basis of his disability. According to the defense attorney, the prosecution never disclosed Saffold’s vision problems to her.

Hopefully, this will be enough to overturn the verdict and get Harris a new trial.

Attorney David Freidberg helps those who have been accused of crimes by the State of Illinois and the federal government get top-quality representation. Give us a call at (312) 560-7100 or contact us online today.