A 92-year-old woman was acquitted of aggravated assault against an off-duty Chicago police officer, but still faces two counts of misdemeanor battery in an incident that left her 86-year-old husband dead. The woman and the police officer’s wife were also shot. 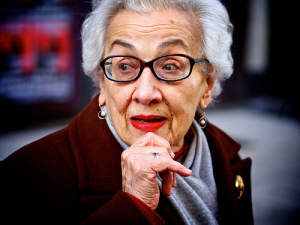 The two couples were neighbors who had a longstanding dispute over what relatives and neighbors of the two couples described as petty differences – snow being dumped on each other’s sidewalks and littering on the lawns. On the day in question, the officer allegedly heard his wife and the defendant arguing, and came out to see the defendant throwing dirt over the fence at his wife and hitting her with a broom.

At some point, the defendant’s husband went back inside the home and returned with a gun, firing at the officer’s wife and hitting her in the chest and arm. It was then that the police officer returned fire, killing the husband and hitting the defendant in the arm.

As I have discussed previously on this blog, an assault is committed if the defendant “knowingly places another person in reasonable apprehension of receiving a battery”. However, assault against a police officer is automatically aggravated assault. In this case, the officer and his wife claimed that the defendant committed aggravated assault because she allegedly reached for her husband’s gun after he had been shot.

A judge acquitted the defendant of aggravated assault, ruling that the prosecutor hadn’t provided enough evidence to support the charge. This was the right call based both on circumstances and the law.

First, circumstances. While the officer and his wife allege that the defendant reached for her husband’s gun after he’d been shot, the chaos that no doubt surrounded the shooting would have made their recollection of the incident suspect. While it is possible the defendant did reach for her husband’s gun – whether to retaliate or to protect herself from further gunshots – the more logical scenario is that she was reaching toward her husband to help him. And since he’d been holding the gun when he was shot, it was likely either in his hands or close to his body, which could have caused the officer and his wife to misconstrue her action. Because of these conflicting scenarios, it casts reasonable doubt on the defendant’s motives, thus necessitating her acquittal.

Now the law. Aggravated assault of a police officer occurs if the assault took place:

The defendant was charged with battery for allegedly throwing dirt at her neighbor and hitting her with a broom. This may seem laughable – potential jail time for throwing dirt on somebody? A battery charge for hitting her neighbor with a broom? How hard could a 92-year-old woman actually hit somebody? Unfortunately for the defendant, the law makes no distinction for the extent of the injury. The slightest touch qualifies as a battery, even if it does not cause any physical damage.

But the prosecution must prove that the defendant did in fact strike the neighbor. If the dirt was thrown in the wife’s direction, but never hit her, or if the defendant simply waved the broom in the air, again not hitting her, the battery charge would have to be dismissed. Or if the wife committed a battery against the defendant first, there could be a claim of self-defense. Or the police officer and his wife could be exaggerating, or even fabricating, the battery claims, in an attempt to make themselves appear less blameworthy. These avenues would all have to be explored pre-trial in an attempt to get the charges reduced or dismissed entirely.

If you have been charged with aggravated assault or battery, contact Chicago aggravated assault attorney David L. Freidberg. With almost 20 years’ experience handling Chicago assault and battery cases, David L. Freidberg will closely examine the facts of your case and work to get the charges dismissed or reduced, or to seek an outright acquittal if it goes to trial. Contact our Chicago, Skokie or DuPage County offices day or night at 312-560-7100 to schedule your free consultation.