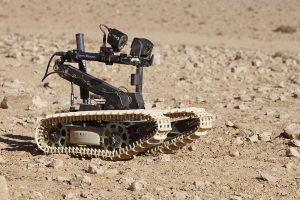 Earlier this month the Chicago Police, SWAT team, and EMS personnel were called to a motel in Edgewater after a man threatened to kill himself, reports DNAinfo.com. However, another emergency responder was also present, Chicago’s crime fighting robot! The robot is a Remotec Andros F6A robot and the idea is that it will enable the police to perform remote operations on Improvised Explosive Devices. While the police robot in Edgewater was only on standby and the situation was resolved without its help, police robots in other parts of the country have been active and in one instance even used deadly force in the name of crime prevention.

Dallas Robot Kills Man in the Name of Crime Prevention

An article in the Chicago Tribune reports that the police in Dallas were the first in the United States to use a robot to kill a suspect by delivering and detonating a bomb. The article also indicates that other law enforcement agencies already have similar robots at their disposal and are willing to follow suit. The Dallas robot was called into action when a 25-year-old army veteran when on a rampage and shot 14 police officers and two civilians. The Dallas Police Department says that the decision to kill the suspect with the robot was made after police negotiator talks had failed. In this instance, the robot successfully detonated a plastic C4 explosive that ended the suspect’s life.

What are Police Robots Equipped With?

According to the Chicago Tribune, dozens of U.S. law enforcement agencies currently have at least one robot. While these robots have been used to safely carry things such as cell phones and pizzas to suspects, they are also designed to deliver deadly force when necessary. The Cook County Sheriff’s Department currently has two robots on hand that are designed to disarm and even kill suspects. The Deputy Chief of Police reports that their robots are capable of disarming suspects by launching projectiles, firing tasers, and even firing rounds with a 12-gauge shotgun.

What are the Legal Ramifications of Lethal Police Robots?

An interesting article on MotherBoard discusses the legal and ethical ramifications of a police department using a robot to administer deadly force. The article points out that under state law, law enforcement agencies are generally permitted to use deadly force against a suspect if they pose an “imminent threat” to law enforcement agents or to civilians, so long as the use of force is both “proportional and necessary”. MotherBoard investigated whether or not, as a matter of law, the way in which this legal force is administered makes a difference. In other words, is there any legal difference between a police officer shooting a suspect who poses an imminent threat versus a police robot taking the shot? While Illinois does not currently have a law on the books that would directly answer this question, it seems that if the robot is not autonomous, and is simply being used by the police department as a tool, then the standard for the use of lethal force would remain the same.

If you have been accused of committing a crime in the Chicago Metropolitan Area, contact criminal defense attorney David L. Freidberg to discuss your legal options. Mr. Freidberg has over two decades of experience working with the Illinois Criminal Code and is committed to providing his clients with unparalleled representation. Contact us today to set up a free and confidential case review at our office in Chicago (312-560-7100), DuPage (630-574-1000), or Skokie (847-674-5400).