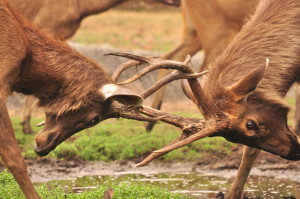 Although “assault and battery” are related, under Illinois law they are two separate and distinct criminal offenses. State prosecutors may charge these two offenses separately, however, in order for a prosecutor to prosecute on a charge of battery, he must also prove the elements of an “assault.”

An assault is the attempt to injure another person through threats or threatening behavior. It is viewed as an attempted battery, but is distinguished from an actual battery in that no contact is necessary for the assault. Wherein, in a case of “battery,” the prosecutor must prove that the defendant caused bodily harm to his victim. Illinois state law requires that for a charge of aggravated battery, the defendant must have used a firearm, or some other deadly weapon, or caused harm to a child or a law enforcement officer.

Is Mutual Combat a Defense to a Charge of Battery?

The term “mutual combat” is defined as two individuals engaged in a physical confrontation with each other, usually because of an instantaneous quarrel where tempers are at their heights. Mutual combat can be seen as another version of “self-defense” used in most cases when the alleged victim is proven to be the actual aggressor in the confrontation.

A mutual combat defense to a charge of battery or murder may be upheld in most jurisdictions to mitigate the sentence, if the defendant did not instigate the quarrel in the first place. Some jurisdictions restrict this defense to cases where a deadly weapon is used by the alleged “victim” and the defendant was defending himself against the original assault and battery. However, the Illinois Appellate Court has held that a disproportionate reaction (deadly force) to a provocation negates a mutual combat defense when it is shown that the defendant’s reactions to an argument escalates to a point where that defendant uses deadly force against the original aggressor. See the People vs. Thompson, 821 N.E.2d 664 (Ill.App.Ct. 2004)

In the People vs. Thompson, the defendant attempted to use “mutual combat” as a defense to a charge of first degree murder. Thompson appealed a 20 year prison sentence, claiming that his “imperfect defense” of mutual combat should mitigated the charge of first degree murder to a lesser offense because he felt that he had an “honest” belief that he was being threatened by his victim with “death or great bodily harm.” The victim, at the time of the shooting was unarmed. An imperfect self-defense claim, if accepted by the court, may reduce a sentence.

At common law the doctrine of “imperfect self-defense was used in some jurisdictions to mitigate the punishment or sentencing in cases where deadly force was used by the defendant who honestly but mistakenly believed that he was in imminent danger of death or great bodily harm. The court’s refused Thompson’s claim of an imperfect self-defense because he failed to satisfy a crucial element of such a claim in that his belief must have been “honest but mistaken.”

Defenses to a criminal act are defined by legislation. An imperfect self-defense may go a long way in some cases to mitigate the sentence a defendant might, under usual circumstances, be subject to if found guilty of a crime. If you are being charged with an assault and battery, or a homicide, consult with an experience criminal law attorney who will work with you, and advise you of any defenses you might be entitled to. Call the Law Offices of David Freidberg today, at (312) 560-7100, or send an email, for a free no-obligation consultation.