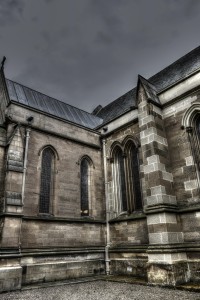 In 2007, McCormack was charged and pled guilty to the sexual molestation of five boys and was sentenced to five years in prison. Later in 2009, the prosecution sought to have McCormack declared “a sexually violent offender,” and to have him committed for an indefinite period of time to the Treatment and Detention Facility (TDF) at the Illinois Department of Human Services.

The TDF was established under the umbrella of the Department of Human Services, as a response to the Sexually Violent Persons Commitment Act. The purpose of the Act was twofold; first, to protect the survivors of sexual violence; and second, to provide for the detention and treatment of individuals convicted of such crimes, who were considered to be dangerous to society as a result of a mental disorder.

McCormack was charged in 2014, under this Act for the molestation of a 10-year-old boy in 2005. While this case was still pending, the boy, now an adult at 21 years old, decided that he no longer wanted to continue with the prosecution of this case, and is no longer cooperating with the state. The prosecutors have dropped all charges for this case, but the previous conviction still stand. For more information on this case, see the Chicago Tribune and the National Catholic Reporter.

In the wake of this case, the court has ruled that any victims who allege abuse by McCormack, after the year 2000 may seek punitive damages against the archdiocese itself, if their criminal case goes to trial and there is a verdict of “guilty.” This ruling stems from the fact that after the cardinal received notice that McCormack had been accused of sexually abusing minor boys, he did not take any steps to remove McCormack from the ministry. McCormack was not removed until his second arrest for a similar charge. The archdiocese admits to paying out $139 million in settlement of sexual abuse claims. As a result of claims against McCormack, the archdiocese has received an estimated 30 substantiated claims against him, and has had to pay out over $3 million to settle cases specific to McCormack.

Caveat: An allegation of sexual abuse is a serious, life-altering thing for both the victim and the accused. Allegations in and of themselves do not amount to guilt. In some instances, the accused must prove that they are innocent instead of the other way around; “innocent until proven guilty.” Seek the advice of an experience criminal defense attorney if you are faced with any accusation of sexual abuse, before you are interviewed by law enforcement.