A Cook County woman was charged with domestic battery for allegedly slamming her boyfriend’s head into a public restroom following his refusal to have sex with her. She was also charged with illegal possession of prescription drugs after police saw prescription pills in her purse that had the name of another woman on the label. 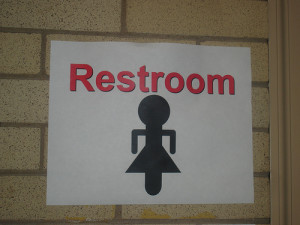 Battery and domestic battery are Class A misdemeanors, so attempting to argue that the victim does not meet the criteria of family or household member would not be a good defense strategy, because the potential punishment if convicted is the same for either crime. The argument that the victim was not a family or household member would be relevant if this was a second charge of domestic battery; in those instances, conviction is a Class 4 felony. So trying to argue the charge down to “regular” battery based on a failure to meet the relationship criteria would be justified.

In this particular case the only viable defenses, if the facts supported them, would be self-defense or accidental. Based on the description of the incident – the alleged victim was using the urinal at the time the defendant approached him for sex – it seems unlikely the facts would support a self-defense claim.

That leaves the defense that it was unintentional. The crime of battery is committed only if action causing harm was committed “knowingly” – that is, intentionally. The woman was in a state of undress when her boyfriend rebuffed her advances; it is possible that she tripped putting her clothes back on. Or, if she was taking medication, it could have impaired her balance, causing her to fall against him. If either of these are true, it would have been her falling against him that caused him to hit his head against the wall, rather than an intentional action on her part.

Illegal possession of a prescription drugs is a felony, and conviction has serious consequences. The first line of defense is to prove that you had a prescription for the drug. The second is to verify that the drug found in your possession is in fact listed as a controlled substance under the Illinois Controlled Substances Act.

If you do not have a prescription, you must prove that the drugs were not truly in your possession. In this case, the police found the drugs when the woman pulled them out of her purse and placed them on the table. The pill container had another woman’s name on it. That alone is not enough to prove illegal possession. Perhaps the defendant had just picked up the prescription for a friend or family member and was planning to deliver it the next day.

Or perhaps the name on the bottle is the woman’s legal name, and she uses another for everyday life. Or maybe the opposite is true – not wanting her prescription history to get out in the event the pharmacy computers are hacked, perhaps her doctor writes the prescription under a different name. It may also be possible that the drugs inside pill bottle were prescribed to the defendant, but she was using an old pill bottle that belonged to somebody else to hold them. The mere fact that the defendant had possession of a pill bottle that did not have her name on it is not enough, on its own, to prove that she was in illegal possession of a controlled substance.

With more than 17 years’ experience handling felony and misdemeanor criminal cases throughout the greater Chicagoland area, Chicago criminal defense attorney David L. Freidberg is an experienced, effective criminal litigator. He will explore all avenues of possible defense in your case to have the charges against you reduced or dismissed, and will fight to win an outright acquittal at trial. If you or a loved one has been arrested, contact the Chicago, Skokie or DuPage County office now at 312.560.7100. Someone is available 24/7 to speak with you.