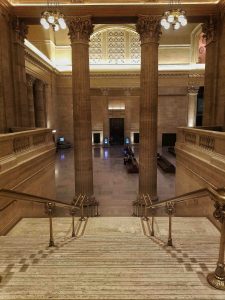 LaRoyce Tankson was acquitted of first-degree murder charges by a Cook County judge in the fatal shooting of an unarmed man. The judge believed that Tankson was in fear for his own life when he discharged his weapon, meaning that the shooting was justified. Family and friends of Tankson breathed a sigh of relief as the verdict was read.

It is not uncommon for police officers to prefer bench trials as opposed to jury trials, especially in Chicago where the police do not have the best of reputations. Nonetheless, prosecutors set forth the case against Tankson himself, characterizing him as a cowboy who acted callously.

Tankson and his partner were on duty at Union Station when they stopped three men for loitering and smoking marijuana. The three men moved along, but did not mention that they had luggage at the station. One of the three men went back to grab his bags which caused Tankson to become suspicious. The officers followed the men back into the station and ordered them up against a wall for a pat-down. One of the men, Chad Robertson, objected to the pat-down and asked the officer why he was bothering them. Tankson responded that he was searching for weapons at which point Robertson took off running.

Tankson says that Robertson looked back at him and reached into his pocket. Tankson, interpreting this as Robertson reaching for a gun, yelled “gun” and pulled his service revolver firing it at Robertson. Robertson was killed.

It was later discovered that Robertson was not armed and that he was reaching for two bags of marijuana which he was likely going to discard. The judge ruled, however, that there was enough evidence of a potential threat that Tankson should not be convicted of first-degree murder.

Tankson was placed on desk duty and allowed to go free after paying 10% of a $250,000 bond. Robertson’s family was not pleased by this and prosecutors argued that Tankson should be held without bond as most first-degree murder suspects are. Robertson’s family has also filed a wrongful death lawsuit against the Chicago police department, but criminal cases take precedence over civil cases, so that lawsuit has been on hold while a verdict was reached in the criminal case.

While the acquittal does not do anything to help the Robertson’s case, it may not necessarily hurt it either. Civil complaints have a lower standard of proof than criminal complaints do, so a jury may find Tankson guilty on a wrongful death charge even after he was acquitted on a first-degree murder charge.

In a similar case, CPD officer Lowell Houser was convicted on a second-degree murder charge after he shot a man with whom he was quarreling. Houser was off-duty at the time of the shooting, which may have impacted the decision of the judge to say that the shooting was unjustified.

If you have been accused of first-degree murder but were really acting in self-defense, call David Freidberg today at (312) 560-7100 and we can begin preparing your defense and securing your rights immediately.