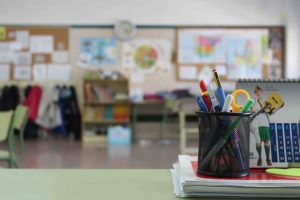 An employee from the Waukegan School District was charged in late February with grooming and sexually assaulting a 13-year-old girl, as stated by Chicago police and district officials.

26-year-old Gabriel Valadez was arrested at the administrative offices of Waukegan District 60. According to police, Valadez would chat with the girl using FaceTime. Authorities do not know how the accused met the girl, but their conversations took place through the app and online. Chicago Police Department policy prohibits providing information about victims, so they declined to mention where the girl was from.

Since 2007, Valadez worked in the district offices as an administrative assistant. He submitted his resignation a week after his arrest. District officials were quick to point out that Valadez was never assigned to work in their schools and had no direct contract with students. As a result, they did not provide any information about the situation to parents.

A spokeswoman from the Cook County jail stated Valadez was recently released from Cook County Jail and is currently on electronic monitoring.

If you have been charged with sexual assault or any other type of sex crime, an experienced criminal defense lawyer will be able to craft a rigorous defense against the allegations and possibly help you get your sentence reduced or even avoid jail time.

How Criminal Sexual Assault is Defined in Illinois

The definitions of sexual assault may vary from state to state.

In Illinois, criminal sexual assault is the act of sexual penetration in which the person accused:

With a Class X felony, the punishment is much more severe. The prison term is no less than 30 years and no longer than 60, unless the victim is under 18 years of age at the time of the offense.

Protect your rights by hiring a skilled attorney.

Attorney David L. Freidberg will tenaciously fight to defend you against the broad spectrum of sexual offenses including:

Staff at our offices are available to take your call 24 hours a day at (312) 560-7100. Schedule your free consultation today so that Attorney Freidberg can start working on your case.