A Chicago-area father is facing charges after his son shot himself in the hand with a household gun. Bernard Shields, 36, of Chicago is facing a felony charge of being a habitual criminal in possession of a weapon with a filed-off serial number. He is also facing a felony count of possession of a controlled substance and several misdemeanor counts related to the discharge of the weapon and child endangerment.

The parents were asleep when the boy found the gun in one of his father’s pants. Anyone who owns a gun should know better than to keep it in their pants when there are children around. He took the gun to the bathroom, ostensibly to play with it, and the gun discharged, injuring his hand. The child was taken to Children’s Hospital where he was treated for his injuries and then sent home. His father fled the scene knowing that police would be arriving shortly, but was later found and arrested.

END_OF_DOCUMENT_TOKEN_TO_BE_REPLACED

There has been a great deal of discussion recently over the role bail plays in American society. Political pundits who are rallying against bail reform cite instances of re-offense while the suspect is awaiting charges for another crime. Political pundits in favor of bail reform argue that the system is patently unfair and individuals charged with nonviolent crimes rot in jail for a year while the wheels of justice slowly turn.

Now, one charity is being scrutinized by the media after providing bail to inmates who then turned around and offended again.

END_OF_DOCUMENT_TOKEN_TO_BE_REPLACED

Both Harvey Weinstein and R. Kelly have filed motions with the court for temporary release during the coronavirus outbreak citing health hazards. Weinstein and Kelly are both older with Weinstein being the more vulnerable of the two due to a recent surgery and more advanced age. Both were denied bail by the courts.

But can others be expected to get their bail denied during the COVID-19 outbreak?

The Virus is a Problem for Prisons

END_OF_DOCUMENT_TOKEN_TO_BE_REPLACED

R. Kelly has been denied a request to seek release from jail during the coronavirus outbreak. The disgraced singer’s attorneys filed a request for bond with the U.S. District Court in Chicago. Attorneys for Kelly claimed that because of his advanced age (53) he was at high risk of contracting and suffering severe symptoms of the coronavirus. Kelly’s attorneys also stated that hand sanitizer and soap are difficult to find at the present moment and that inmates are kept in small cells and are not practicing social distancing.

Nonetheless, the court rejected Kelly’s request and the embattled pop star is not elderly enough to be considered in the high-risk group. Kelly had also undergone a recent surgery for a hernia, but the court ruled that it did not place him in a substantially higher risk group than others. Lastly, federal authorities reported that the prison has enough soap and hand sanitizer for everyone. The final nail in the coffin was that there were no reports of the virus among inmates.

END_OF_DOCUMENT_TOKEN_TO_BE_REPLACED 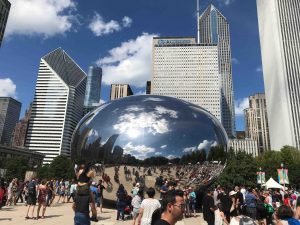 Each state has its own laws when dealing with quarantine orders. There are also federal laws that lay out penalties for violating a quarantine order. These laws vary widely from one state to another. In some places, like Florida, you can be charged with a misdemeanor and face six months in county jail.

The City of Chicago and the State of Illinois have their own measures in place for meting out punishment for those who violate a quarantine order. In this article, we will take a look at what the law says about staying indoors during this difficult period.

All Sick People: Shelter in Place

END_OF_DOCUMENT_TOKEN_TO_BE_REPLACED

A Chicago jury has convicted Shomari Legghette of the first-degree murder of Chicago police officer Paul Bauer. Legghette attempted to say that the shooting was in self-defense, but the jury listened to evidence that Bauer had pursued Legghette after other officers called in suspicious activity around the Thompson Center. Bauer was in uniform at the time of the shooting but was wearing a jacket over his uniform, bolstering the defense’s argument that Legghette had no reason to believe that Bauer was a police officer.

Bauer pursued Legghette on foot and a fight broke out. The two ended up tumbling down the stairs. The prosecution asked jurors to focus on the 25 seconds between when the fall happened and the sound of gunfire. Much of the incident was caught on video. Prosecutors said that Legghette should have figured the situation out when he saw Bauer with handcuffs and noticed his police radio on full volume.