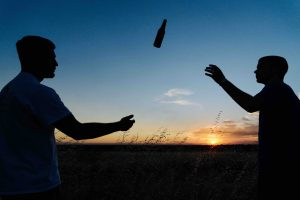 Passengers have the same restrictions as the driver and cannot mount a successful defense to the effect that they were not actually in charge of the vehicle. In other words, drinking whilst someone else is driving in Chicago is breaking the law and some local ordinances. There are exemptions where the alcohol is in the car but the seal is not broken because the person could be just transporting it to another venue. In this respect, Chicago differs from states like Pennsylvania where carrying any alcohol in car regardless of whether the container is open or closed, is illegal. Other exemptions apply to chauffeured cars where the passengers are in the back. Examples include limousines and chartered shuttles. The key is to keep the alcohol well away from the driver.

One of the consequences of being caught and successfully prosecuted is the loss of driving privileges. This may be for a given period of time but it also includes some level of endorsement on your record to show that you have committed this offense. This is not a law here breathalyzer tests are necessary. All that has to be proved by the prosecutor is that there was an open can within a car and that you are the one that was either driving or the passenger. Of course if you are a driver, a DUI test may be called for in order to ascertain whether the prosecutor can press other charges.

Rationale for the Law

Making drunk driving an offense took a long time because people assumed that it was their civil right to be able to drink as and when they wished. The law seemed to be an infringement on their rights. On the other hand, public safety issues are paramount when designing legislation. Any act that threatens the safety of the public has to be dealt with harshly in order to deter future infringements. It is not a circular argument but one which is rooted in the right of the government to control behavior through public policy. Over time it has become clear that many members of the public support such measures. Regulation of alcohol consumption is a recognized administrative measure,  particularly when it comes to parks and beaches. Call David Freidberg Attorney at Law now at 312-560-7100 to get the legal help you deserve.