A Chicago man was charged with six counts of theft by deception for allegedly obtaining merchandise through telephone solicitations and then turning around and selling it for cash.

Defense of Chicago Theft by Deception 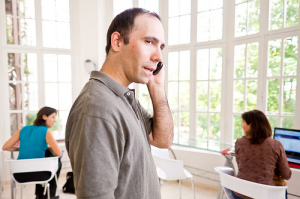 The article does not clarify the alleged deception, but one likely scenario (and the one we will assume for purposes of the discussion in this post) is that the defendant posed as an employee of a charitable organization and called homes and/or businesses soliciting donations. Upon being offered items of significant value, collected the items and turned around and sold them for cash.

Regardless of the details of how the alleged crime unfolded, theft requires that the defendant “knowingly” obtain control over another’s property by deception. So defense against the charge would focus on raising reasonable doubt as to whether the defendant’s actions were done with proper intent – whether he knew that he was obtaining control over another person’s property through the alleged deception. Factors that would need to be considered in determining whether the defendant had the requisite knowledge include:

If the defendant made the phone calls and sold the property under the direction of a third party, and was led to believe that the solicitation and sale of the property was for a legitimate purpose, then he did not knowingly obtain control over the property with the intent to deprive the owner of his control. Instead, he himself was under the false assumption that the solicitation was genuine and not for the purpose of illegally obtaining the victim’s property.

If, however, the evidence tends to show that the defendant did knowingly obtain the property through deception, then it would be to his advantage to negotiate a plea agreement with the prosecutor. The defendant was charged with six counts of theft ranging from $300 to $1,000 per instance. Assuming that five of the six charges were for $1,000, the maximum value of stolen property would be $5,300.

Going to trial for a string of thefts of such a small amount – and in cases where the victims willingly gave away their property, albeit under false pretenses – would be a waste of time and resources for both the prosecution and the court system to have a case this size go to trial. These types of cases are prime examples of how the skill and expertise of an experienced Chicago theft crimes attorney can mean the difference between a lengthy prison term – theft of less than $10,000 in property is a Class 3 felony, and conviction on each charge carries the possibility of between two and five years in prison – and a concurrent sentence or even probation.

A Chicago theft charge, whether theft by deception, force or threat of force, is a serious charge that can net significant prison time. If you have been arrested, call the Law Offices of David L. Freidberg. With close to two decades’ worth of experience handling felony and misdemeanor theft cases, Chicago theft crimes attorney David L. Freidberg has built a reputation as an aggressive advocate for his clients. He will meticulously examine all the evidence in your case and discuss all of your legal options, whether that is seeking to have the charges dismissed, mounting a defense in court or negotiating for a reasonable plea agreement with the prosecutor. With offices in Chicago, Skokie and DuPage County, David L. Freidberg is available to take your call 24/7. Contact him today at 312-560-7100 to schedule your free consultation.